Judge Hershey is the current Chief Judge and youngest to ever hold that title. Hershey first appeared in the Judge Child Quest starting out as a Judge just out of the Academy and quickly rose in ranks, going trough as a member of the Council of Five, Deputy Chief Judge and finally the Chief Judge herself in 2122.

During the length of the series Hershey has gone from being over-emotional and brash to a Judge who sticks hard to the rules, but is very open and capable of making compromise. She tries to maintain a good relationship with the citizens of the City, which has been especially difficult since tragedies like Chaos Day and the Total War attacks. She has a long running friendship with Dredd, and often listen to what he has to say knowing that he's nearly always right. 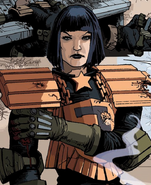 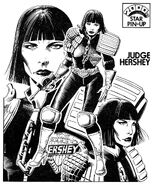 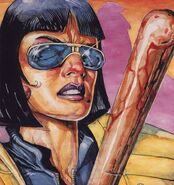