Brother Morgar was the leader of the Mutie Brotherhood and was an antagonist encounterd by Dredd during his mission to Mega-City Two across the Cursed Earth.

Morgar was a odd and evidently insane tyrant who belived himself as some kind of deity, certainly enough that even his own followers belived it.

Morgar is first seen in an abandoned outpost, forcing his followers Brother Obee and Jobee to test a can of baked beans to ensure it wasn't poisoned. He is then informed by Brother Gomorrah about the K21 Killdozer  stationed nearby Mount Rushmore.  Morgar quickly leads his convoy to head on fight the Judges and has a La-Saw attack first. Dredd manages to quickly kill the La-Saw pilot, but the Landraider module splits off from the Killdozer and is captured by Morgar's forces. Dredd forces the Brotherhood to release their prisoners however when he threatens to damage the carving of Morgar on the side of the mountain.

Dredd and the others escape, but Morgar and the Brotherhood quickly follow, eventually coming to a final shoot out in the wreckage of a ruined town. Several of the mutants diverge from attacking the Judges and turn their attacks against a young psychic namedNovar. Dredd saves Novar's life and in turn, Novar saves his after Morgar throws a knife at Dredd, Novar uses his powers to turn the knife back at its thrower and strike him in the heart, killing Morgar.

Later during the last leg of his journey, Dredd looses sight of his comapnions and begins to hallucinate. Amongst his hallucinations was Morgar who claimed to have teamed up with many of the foes such as the Alien Catcher General, Bad Bob Booth and and even Satanus. Dredd ignores the images however and pushes forwards on his march. 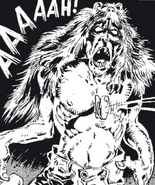 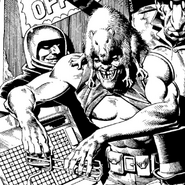