Chief Judge Cal was an insane tyrant that made a mockery of the Justice System and held power over Mega-City One as Chief Judge for a hundred days, causeing chaos throughout before being killed by the combinded efforts of Judge Dredd and the Undercity dweller Fergee.

Cal was well known to be highly ambitious and would take down anyone who stood in his way by any means nessacary. Even before becoming the Chief Judge he was shown to be highly corrupt, misuseing his role as head of the SJS to make its Judges into assasins.  His personality was camp, playful and undeniably twisted, which only furtherd the more his insanity grew.

Cal dreamed of absolute power and would stop at nothing to get it. When Judge Dredd returned from his mission to Mega-City Two, Cal began a scheme to take control of Mega-City One. Hireing a robot designer named Chick Parker to make a deadly robot styled after Dredd. After completeing the commision, Cal murdered Parker and sent the robot to kill two newspaper men and frame Dredd for the crimes. For this, the real Dredd is arrested and sent to Titan. However he escapes, destorys his robot duplicate and prooves his innocence. 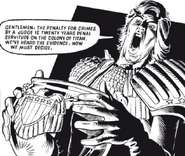 Cal in his office, note the Hitler poster, art by Brian Bolland

Cal shows off his lovely smile, art by Brian Bolland 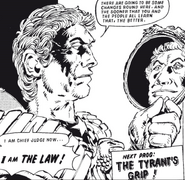 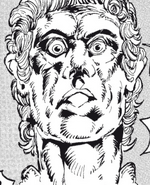 Cal looks down on his adversaries, art by Mike McMahon 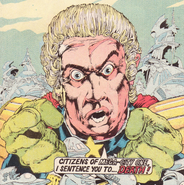 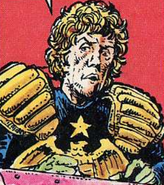 A fake Cal created by Behemoth the Beast, art by Carlos Ezquerra
Community content is available under CC-BY-SA unless otherwise noted.
Advertisement