Call-Me-Kenneth was the leader of an army of robot revolutionsits and led a barrage of chaos and destruction during 2099 instigateing the first Robot Wars.

Call-Me-Kenneth was at first fighting for the equality of robots and for them to be recognised as sentient beings with emotion, however as the story unravels it becomes clear that he was really a self serveing fascist who was more than happy to execute and abuse his own people, even taking notes from his idol Adolf Hitler on how to rule.

Call-Me-Kenneth was a Carpentry Droid, that for some unknown reson, broke the law of robotics and went on a killing spree. Kenneth succeeded in slaughtering a good number of people before Judge Dredd finally arrived and tried to combat the droid. He shoots out it's sensors but is hit by incapacitated in the process. Kenneth brings out a chainsword and believes itself to cut into Dredd, however having had his sensors shot out it misses and presumes Dredd dead as it continues on its rampage. Using this to his advantage, Dredd shoot down some power cable that make contact with Kenneth, causing the robot to go haywire and cut through its on body.

After the event, Dredd tries to convince Chief Judge Goodman to get a ban on all high maintenance robots. Goodman refuses and Dredd resigns. At the same time however, Kenneth is rebuilt by scientists trying to figure out why he decided to kill humans. He is given a new and even stronger body than before and accidentally re-activated by a clumsy nurse. He goes on to slaughter the scientists on live television before making a speech directed to all robots, rallying them to kill their masters and join his revolution. Pretty soon Kenneth has amassed an army.

Chaos erupts as the robots rampage across the city. Dredd takes back his badge and leads a squad of Judges to battle the robot menace. Kenneth sends out the Heavy Metal Kids to fight Dredd's squad but they are quickly defeated by their own stupidty. Dredd decides to try and infiltrate Kenneth's base with a good robot named Walter. The two are caught by Kenneth's sentry's however and brought to him. Walter is sent to the assembly line while Kenneth gives Dredd a tour of his factory showing off his weaponry. During this time Dredd sees the cruel way that Kenneth rules over the robots and compares him to Adolf Hitler. He goes on to show Dredd a perfect duplicate of the Judge and tells Dredd that he plans to place Dredd's brain in the robot duplicate. Dredd attempts to escape but is beaten down by Kenneth's Overseers. However Walter later comes to his aid and destroys his bonds with corrosive acid.

Kenneth pulls together a strike force of Heavy Metal Kids and goes out to with the intention to destroy the Grand Hall of Justice and stamp out the Judges. In the meantime Dredd gathers his own group of robots unhappy with the way Kenneth was ruling, they assist Dredd in causing a small scale civil war between robots who support Kenneth and those who oppose him. Kenneth's forces are quashed and Dredd goes to Weather Control and uses electricity to scramble the circuits of the Heavy Metal Kids, they turn on each other just as the reach the steps of the Grand Hall. kenneth is accidentally struck and falls from a bridge, miles down to the ground below.

Badly damaged but still working, Kenneth goes on a final maddened assault. He hijacks aTexas City oil liner and attempts to flee, Dredd follows and the two fight atop the ship, Kenneth accidentally hits a oil pipe, the oil spurts out soaking Kenneth in it and knocks Dredd off the ship, as he falls however Dredd fires a round from his Lawgiver which ignites in the oil roasting Kenneth almost instantly before blowing up and taking the oil liner with him.

Years later a model of Kenneth's body was gatherd by Walter the Wobot who had origonally fought against Kenneth during the Robot Wars. Walter began to use the model as a object of worship, placing it on a crucifix as he attempted to start off a second Robot War. This fails and Dredd knocks the model from the cealing smashing on the ground in front of Walter's subjects.

Kenneth and Dredd by Ian Gibson 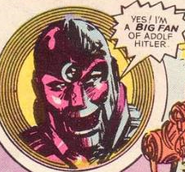 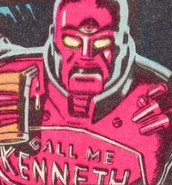 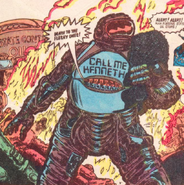