Psi-Judge Cassandra Anderson Is a major character in the series. Anderson is a senior Judge in the Psi-Division who is considered legendary among her peers, this is primarily due to having assisted Dredd against many of the greatest threats to the city the most famous of which being Judge Death.

Thanks to her high level Psi powers she is incredibly empathic and is higly receptive to strong emotions, which she can work to her advantage just as much as it can work against her. She is shown to have some serious problems with the way things are run by the Judges coming into conflict with the system multiple times, and for a short period she left Earth because of it. Her relationship with Dredd is very rocky, she is shown to have had sexual feelings for him which he has turned down, nether the less the consider one another friends.

Anderson Drawn by Brett Ewins in her first solo strip 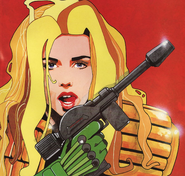