Hadrian Volt was the Chief Judge of Mega-City One from 2116 to 2121. He proved to be one of the more popular Chief Judges, and was highly accomplished before his placement having been a veteran during the first Robot Wars and the Apocalypse War.

Volt was a very shoot first, ask questions later kind of Judge, he had a somewhat friendly attitude despite his stern beliefs. During his reign he helped improve relationships between the Judges and the citizens. Despite differences in opinions he and Dredd got along , Volt frequently sparred with him to stay fit and likewise Dredd considered his ideas as good for the City. He foundShenker arrogant had very little faith in the Psi-Division, apart from maybe Judge Anderson. tragically, thanks to the Second Robot War, Volt gathered a guilt complex and despite keeping a brave face and seeing the event through to the end, he ended up committing suicide in the aftermath. 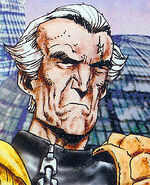 Volt during his first appearance, drawn by Carlos Ezquerra 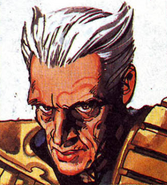