Judge Death (formerly Sidney De'ath) is the leader of the infamous Dark Judges and Judge Dredd's most iconic foe. He was responsible for wiping out the entirety of Deadworld and has plagued Mega-City One several times, claiming countless numbers of lives every time he does so.

Death is an insane, bloodthirsty and psychopathic madman. Thanks to the philosophies taught to him by his father, Death grew up with a morbid fascination of Death. As he grew up, this expanded until he saw life itself as a crime and the only way to rectify it was by death. He claimed to be in love with both Nausea and Phobia and seemed to see Fear, Fire and Mortis as his friends. He hates being mocked but loves to taunt, manipulate and terrorize others for his own sick pleasures.

Originally from a parallel earth, he joined the judges of his world so that he could kill people legally. His extreme measures in dealing justice earned him the nickname "Judge Death". After meeting the Sisters of Death, Phobia and Nausia, he and three other judges were transformed into the Dark Judges with uniforms that reflect their personalities. This is to carry out his vision for his world - the destruction of all life. He reasoned that since crime was committed only by the living, all life is a crime. They destroyed all life on their world with the help of the still living judges before they themselves were killed by the Dark Judges.

When dimensional travellers visited "Deadworld" as it was after the Dark Judges succeeded, Judge Death "judged" them. He then travelled to Mega-City One in order to continue his crusade in that world, only to be contained by Judge Dredd, but not without heavy civilian casulties. Each time he and his fellow Dark Judges escaped, they inflicted a huge death toll on Mega-City One before they are captured again usually involving Judge Dredd. 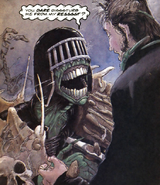 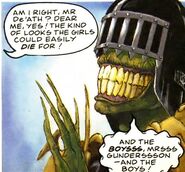 Judge Death does not discriminate

An illusion of Judge Death by Carlos Ezquerra 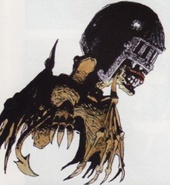 Sidney in his Street Judge uniform
Community content is available under CC-BY-SA unless otherwise noted.
Advertisement