Judge Mortis is one of the four original Dark Judges. The sheep skulled creature originally hailed from Deadworld and cast down death and destruction upon the citizens of Mega-City One several times.

Mortis is easily the most sadistic of all the Dark Judges, taking pleasure in the slow and painful torture of his victims, enjoying the idea of slowly following trailing after his prey as they attempt to flee. On Deadworld, Mortis had a garden full of fungal mounds and decaying corpses, in his garden was a building where Mortis made wine, from the bodies of his victims. Like the other Dark Judges, Mortis believed life was a crime and was punishable by death.

Mortis on his first appearance by Brian Bolland 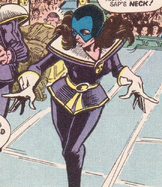 Mortis during Necropolis by Carlos Ezquerra 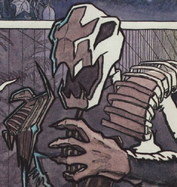 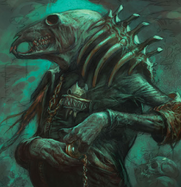 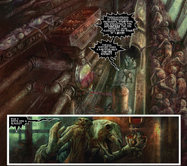 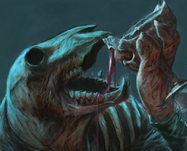 Mortis drinks his human made wine
Community content is available under CC-BY-SA unless otherwise noted.
Advertisement