"Mad Dog" Kazan was the primary antagonist during the Apocalypse War. He first served as the War Marshall as the Sovs invaded Mega-City One, and later became the Supreme Judge after having Bulgarin and the Diktatorat assasinated.

Kazan was a bloodthirsty manic who expressed little emotion. He was totally loyal to his country, not so much to his leaders however. He delt harsh punishments to soldiers who failed him, either executing them or sending them to camps in Siberia. 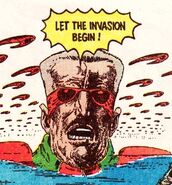