The Mutie Brotherhood was a gang of insane mutants that were led by Brother Morgar.

The Mutie Brotherhood was a large gang of mutant maruders living in the ruins of South Dakota. They got on very well together and were led by the fairly insane Brother Morgar whom they worshiped as some kind of holy deity. So much so that when chanceing upon a La-saw in storage, they used it to carve Morgar's face into the side of Mount Rushmore.

When Judge Dredd and his crew drove past Mount Rushmore in the Killdozer, they were spotted by Brother Gomorrah who quickly reported the sighting to Morgar. In response, Morgar rallied his troops to confront Dredd and his men. Their La-saw attempted to slice the Killdozer to detach and spilt in half. Dredd then shoots the pilot, sending him flying into the sculpted head of John F. Kennedy. Dredd then threatens to shoot the bust of Morgar unless the Brotherhood departed. Morgar bites and the mutants flee.

However the Brotherhood doesn't give up and tails Dredd for several miles. Dredd and co. encounter a young psychic mutant named Novar sculpting a metal tree. The Brotherhood then attacks outside of Novar's home, and successfully kill one of Dredd accompanying Judges. Novar becomes sickened by the violence and uses his psychic powers to split apart the leaves of his metal tree and cut into the Brotherhood attackers, he then controls Morgar's own knife to stab Morgar in the chest. The surviving Brotherhood members then flee back to their home. 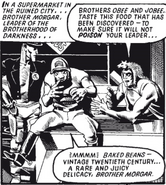