Edit
watch 01:36
We're Getting Mutants in the MCU - The Loop
Do you like this video?
Play Sound

Randolph "Whitey" Whitley was a gang leader who served as the first antagonist to face Dredd in the very first Judge Dredd story.

Whitey was a stubborn anti-authoritarian man with a deep hatred for the Judges and especially Dredd after he sentenced him to life on Devil's Island. He wasn't stupid by any means, managing to escape from the reportedly inescapable Devil's Island twice.

Whitey first came to Dredd's attention after the murder of Judge Alvin. Dredd reacted to the murder of his fellow Judge by storming Whitey's hideout in the derelict Empire State Building, killing his two associates and arresting him. He then dumped Whitey off in the roadway prison Devil's Island.

After several months of entrapment on Devil's Island, Whitey had his cellmate design a small scale weather altering device, Whitey quickly killed him upon completion and used it to create a massive snow storm before hunting down Dredd. He located the lawman but the fight proved short and Whitey was blinded by a snowball before being beaten down and returned to Devil's Island.

Whitey got another chance of freedom when his brother Welch Logan designed robots capable of causing mass destruction. Welch demanded the release of his brother or else he would use the robots to destroy the City. Whitey is freed and Dredd is taken hostage, however Logan's plan doesn't follow through and ends up getting killed by one of his own robots. Afterwards Whitey is returned to Devil's Island yet again to carry out his harsh sentence.

Whitey standing over the corpse of Judge Alvin, art by Mike McMahon 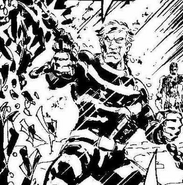 Whitey in the snow, art by Ian Gibson 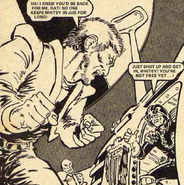