Sabbat the Necromagus (Formerly Soppi Walters) was responsible for the extinction of the entirety of the planet Bethsheba before turning his attention to Earth, creating an army of the undead to help him in his purging.

Sabbat had an unhealthy and disturbing obsession with the dead, finding death fascinating and even preferring their company to that of the living. He also had a sadistic sense of humour, creating undead monstrosities that sung as they slaughtered or keeping his former childhood bully Big Den as a undead slave, it can likely be assumed that his cloak was created a similar way.

Similar to Big Den , Sabbat is a parody of Walter the Softy from the Beano Comic(a more comedic comic that was published by rivals DC Thompson). . Walter was constantly bullied by Dennis the Menace in the original strip, hence Soppi's revenge here . 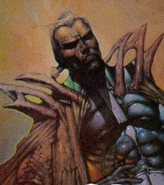