The black tyrannosaur known as Satanus first encountered Dredd in the Cursed Earth and continued to encounter the lawman several times in later years. Satanus has a truly fierce legacy having spawned genetic experiments, death cults, travelled through alternate worlds and even opened a gateway toHell allowing for a demonic invasion of Mega-City One.

Satanus is shown to have a slightly above average intelligence level for an average tyrannosaur. He has a amazing level of ferocity and a intense survival instinct. It has a deep rooted hatred for Dredd and all Judges from his first encounter with the lawman.

Satanus was one of several children birthed by the hag-Tyrannosaur Old One Eye. As he grew he learnt many of his vicious killing techniques from his mother, and quickly became the best of the litter. Eventually Satanus decided to try and overthrow his mother as the pack leader, thinking her an easy target at 88 years old. He waited until she was alone and fought her, however after a ten hour long battle, Satanus lay defeated with every bone in his body broken, and his mother devouring his slowly dying carcass.

Thousands of years later however, Satanus was reborn from DNA found in his bones and became the star attraction of a dinosaur petting zoo. Satanus proved to be to viscous however, and eventually escaped his pit and went on a massacre around the zoo, killing seven tourists. It was decided that Satanus was to be lobotomised, but Satanus escaped yet again, killing his captors and later any search parties that followed. Eventually he made it to Sauron Valley where he became the leader of a Tyrannosaur pack.

The nearby town of Repentance would sacrifice travellers to the Tyrannosaurs so they didn't attack the town, amongst these sacrifices was Judge Dredd and his companion Spikes Harvey Rotten, however the two escape, killing several members of Satanus pack in the process. The pack follow and begin rampaging through the town. Satanus breaks into the town jail and begins feeding on the prisoners, getting Judge Jack, stuck in his teeth. Eventually Satanus fell into the catacombs of the town church were Dredd and the other used flame throwers on the Tyrannosaur before leaving, believing it to be killed. Once all parties had departed from the ruins of the town however, Satanus emerges from the wreakage of the church, vowing revenge against Dredd.

Satanus went on to wander the Cursed Earth for several years, at one stage being captured by a travelling circus. He quickly escaped of course and killed many of the circus acts. This attracted the eye of Thoth, the son of Nemesis the Warlock who plucks him from the time period to his current one and makes Satanus his pet. Thoth upgrades names the Tyrannosaur "Thing" and grants it the ability to spew flames. Satanus and Thoth travelled together for years, however as the child grew he saw his friend get badly wounded several times and grew repulsed by its viciousness. Eventually he took Satanus back to the late Cretaceous era and released him, allowing for him to become the king of his domain he had always strived to be. 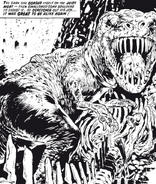 The Evil One first appears, art by Mike McMahon 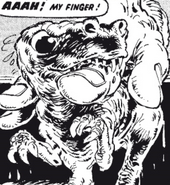 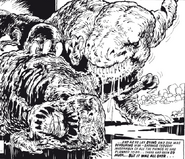 Old One Eye stands over Satanus

Judge Dredd is sacrificed to Satanus