Spikes Harvey Rotten was a no good criminal gun runner, who redeemed himself during a quest across the Cursed Earth to deliver a cure to the plague-ridden Mega-City Two where he acted as Judge Dredd's guide.

Spikes was a pure and honest punk, right to the very bones. A tad dim and a dirty fighter with a taste for low brow humour and even a cheat at cards. To the surprise of everyone however, he was loyal and ended up being one of the few people to earn the respect of Judge Dredd himself. Spikes would go on to sacrifice himself and die a hero.

After several years of gun-running for the Cursed Earth gangs, Spikes eventually came to Dredd's attention when he and his biker gang the 'Muties' took part in the Mega-City 5000 race across Mega-City One. Competing against the 'Spacers' and their leader Zoot Smiley, the two gangs found themselves trapped after they had been circled off in an operation led by Judge Dredd.

After the gangs break through the road block, Spikes, Smiley and co race through the city to the finish line. Dredd and a group of Judges (Including Judge Giant) give chase. While the other Judges are knocked from their Lawmaster's by the bikers, Dredd and Giant keep to the chase. As Spikes and Smiley get close to the finish line inside a shopping centre, the two Judges split up to take out the respective leaders. Dredd knocks out Smiley and Giant challenges Spikes to a game of chicken. Giant bails and Spikes crashes just before the finish line, he drags himself across several meters before collapsing with the goal just out of his hands reach.

After arrest Spikes was sent to rehabilitation, this failed however and he tried to escape. During his escape he was captured by Judge Dredd who forced Spikes to serve as his guide across the Cursed Earth, helping him avoid conflict with danger as he delivered a much needed cure to the infected citizens of Mega-City Two. Spikes reluctantly agreed and set off alongside Dredd, several other Judges, some War Droids and the Killdozer.

The journey quickly went underway and Spikes is given a Lawmaster primed to self destruct should he try and escape. Not far from the City walls, he and Dredd come a small town named Deliverance run by an insane old man calling himself the Lawgiver. Dredd is captured and placed in a cell shortly before the town is attacked by mutant rats named the Devil's Lapdogs which ravage the area and kill the Lawgiver. Spikes breaks Dredd out of his cell and Dredd then deals with the rats.

As the journey continues, Spikes encounters a whole range of bizarre foes alongside Dredd including the Mutant Brotherhood, Vegas City mafia, Vampiric Med-Droids, the Jolly Green Giant and more. Eventually the group took on Tweak a small rock eating alien that escaped his slavers. Initially thinking it a dumb animal, Spikes mistreated the alien but upon learning its story and intelligence he softened up and befriended the creature.

When reaching the town of Repentance, Spikes and Dredd were knocked out by the townspeople and tied to posts as sacrifices to the black tyrannosaurus known as Satanus and his pack. The two escaped however and Spikes blows up one of the Tyrannosaur's with a grenade he found when dealing with the vampiric Med-Droids. The then lead the dinosaurs back to Repentance and proceed to lay waste to the town and its people.

After a few more misadventures, the group now consisting of Spikes, Dredd, Tweak and Judge Jack finally reach Death Valley, the last leg of the journey. As they travel through the ruinous desert they are set upon by a army of maddend war-droids that formerly fought against the Judges in the Battle of Armageddon. They quickly kill Judge Jack and chase the others who end up hiding in a small derelict building. For the next several days the trio fights against the robot Legion and their leader General Blood'n'Guts. Eventually Spikes was gravely wounded, knowing he was dying and not wanting to hold the others back, he decided to go out in a blaze of glory and began fireing wildly before being shot down in a hail of bullets. Shortly after Dredd dresses Spikes body in a Judges uniform and places him on the last Lawmaster. Setting the bike and Killdozer to auto-pilot, he had it drive straight into the Legion before self destructing, taking out a large number of the war-droids, including the General himself. Afterwards, Dredd looked back on his fallen friend and lamented that he was the greatest punk he had ever known.

In his memory, a statue of Spikes was erected in his honour alongside on of Tweak in the Hall of Heroes.

Spikes at the start of The Cursed Earth, art by Mick McMahon 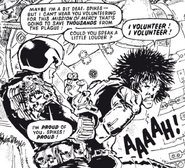 Spikes gets some jewelry 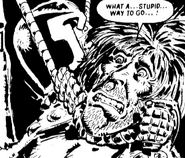 Spikes and Dredd are hung up by the Burger King Creeps

The punk with half a planet, art by Brian Bolland

Spikes, Dredd and Tweak fight off the Legion of the Dammed 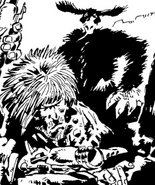 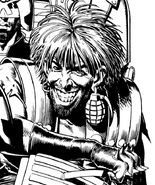