Edit
watch 01:36
We're Getting Mutants in the MCU - The Loop
Do you like this video?
Play Sound

Sadu was stern and distrusting of foreigners, taking a disliking Dredd almost instantly, and distrusted him (Not entirely without reason). Sadu does show great respect for the law however and isn't afraid to dish out harsh punishments, similar to Dredd. He also struck a friendship with the mutant bounty hunter Johnny Alpha during Judgement Day.

Sadu was assigned to look over Dredd during his visit to Hondo-City. Unknown to Sadu, Dredd had been sent to take out a rouge Mega-City One sleeper agent robot that had gone berserk and went on a killing spree.

Dredd accomplishes this and successfully destroys the robot as in attempts to flee, hitting a fuel tank nearby, completely incinerating the robot. Sadu however was suspicious of Dredd, rightly believing that the agent was sent by MC-1. He challenges Dredd to a Tendo battle and successfully defeats him, when unconscious Dredd is drugged and Sadu attempts to extract the truth from him, Dredd however had already taken counter intuitive drugs and gives false answers to Sadu's questions. Not having any proof of misdeed, Sadu grudgingly lets him go.

Several years later in 2114, Sadu encounters future bounty hunter Johnny Alpha and immidetely attacks him, thinking him a companion of Sabbat the Necromagus who had arrived several days before and killed several of his fellow Judges, Alpha tries to protest his innocence but Sadu continues his attack, so Alpha teleports away. Alpha later saves Sadu's life from a group of zombies and Sadu finally belives his story.

Later Sadu feeling Dredd had denied him a proper battle in the last encounter, beliveing that he had cheated in some way fights the Judge, but even with the assistnce of Alpha, Sadu is badly beaten.

Sadu is selected as a member of the strike force against Sabbat after he was located to be hiding in the Radlands of Chi. Sadu manages to hold of against Sabbat's forces until only he Dredd and Alpha were left standing and eventually captured.

Sabbat begins to mock the three, and details his plan and how he gained his power from a crystaline structure known as the Loadstone. Sadu cuts himself three and knocks Sabbat to the groud as he runs to the loadstone, in retaliation Sadu uses his magic to crack his ribs, pull out his eyes and crush his heart. In a final act of heroism, Sadu stabs himself through the stomach and into the Loadstone giving him temporary control of the Loadstone allowing for the other to escape before he died. 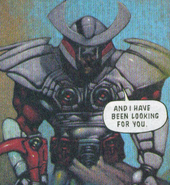 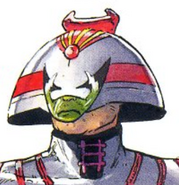 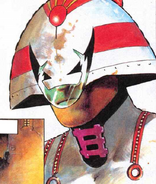