Don Uggie Apelino was an uplift who ran the infamous Ape Gang operating from within the Jungle.

Apelino gained much of his character from the gangsters of the late 1920's-30's. He was cocky, rude and short tempered, nether the less he had managed to lead his gang well and quickly became a nuisance for Justice HQ.

Apelino rose to the title of Don in 2099, replacing Vito and turning the Ape Gang into a more violent force with full control over the criminal activity in the Jungle. Almost instantly Uggie begins to branch out, angering the East Side Mob as they moved into one another's territory.

Uggie and his two top men Joe Bananas and Fast Eeek confront Judge Dredd in his office and demand that the Judges stay away from their buissness, planning to start a gang war with the East Side Gang, Dredd orders them to leave promisng to come down heavy if they break the law.

A war emerges with both sides striking against each other, on the fourth day of the violence Dredd attempts to hunt down the instigator behind the attacks, Don Uggie himself. Dredd interogates Apelino's mother and discovers that the Ape Gang was planning to abush an East Side Mob truck, so the Judges comandeer the truck and counter ambush Apelino's gang. Uggie tries to make a break for it but fails and he and his surviving gang members are then jailed. to the Mega-City Zoo.

After two years in prison, he and his boys put out a hit on Dredd, offering a billion creds to do so. This prompted a large number of hitmen to try and put a bullet between his head, it ended badly of course and Uggie and his boys simply wound up in jail a second time.

During the aftermath of the Apocalypse War, Uggie and his gang escape from prison and return to the ruins of what was once the Jungle, however overtime their intelligence regresses due to radiation from the fallout. Uggie still in control begins to kill any travelers who strayed inside his territory.

After a group of backpackers are assulted by Uggie's boys, Dredd investigates and plants a tracking device on Fast Eeek. Eeek leads Dredd back to the Don's camp and Dredd begins to execute the apes until it was just him and Don Uggie left standing. Uggie lets out a roar and attempts to spear Dredd, but is imedietely shot down, dying instantly.

Uggie's gandson Itchy breifly took the role of Don in 2121.

Uggie in his prime 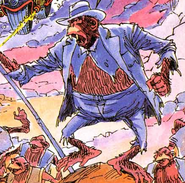 Uggie several years into his exile to the Cursed Earth
Community content is available under CC-BY-SA unless otherwise noted.
Advertisement