Walter the Wobot was for a long time the house servant robot for Judge Dredd. He was primarily used for comic relief, however he sucsesfully helped bring down both the robot revolutionist Call-Me-Kenneth and insane tyrant Cal.

Walter was often used as a comic relief character, he had a speech impediment caused from stress he gained during the first Robot Wars, but was made a free robot (Essentially giving him the same rights as a normal citizen). He worshipped Dredd, buying him many gifts, and saved his life many times. After his near death experience at the hands of Mean 'Machine' Angel and then abandonment, Walter grew to resent and even hate Dredd, having felt abused and unfairly treated by Dredd's hands, however after a brief spell in jail Walter asked to be rewired so he lost his violent attitude and was sent to live with Mrs. Gunderson. Years later it is shown that Dredd does feel guilty about the way he treated his house robot and still pays him a visit every now and then.

Walter origonally served as a deluxe robot coffiee machine at the Grand Hall of Justice, during the Robot Wars he went into hiding but was quickly discovered by the Judges. to save himself from being executed, Walter promised to help Dredd take down Call-Me-Kenneth and his army. Dredd and Walter suceed with the help of the robotic trio; Howard, Stewart and J70 Stroke 13, and Kenneth is destroyed. In reward for his efforts, Walter is given citizenship. The droid quickly gets rid of the certificate however and elects to become Dredd's house servant instead, much to his ire.

Walter quickly became a well meaning menace in Dredd's life, often being more of a nusiance then an actual help. He often came into conflict with Dredd's housekeeper Maria and would on occasion he would become unintentionally involved with some criminal gang or operation.

Despite this Dredd still allowed the robot to join him during his trip to Luna-1, during which he saved Dredd from several attemps on his life. 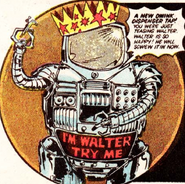 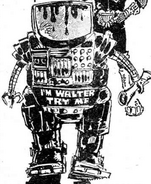 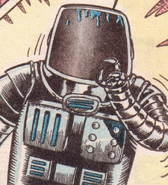 Walter being interrogated by Judge Cal, art by Brett Ewins 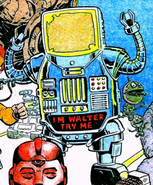 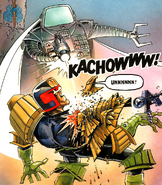 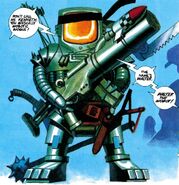